Or Install Dominoes App for Android or iOS 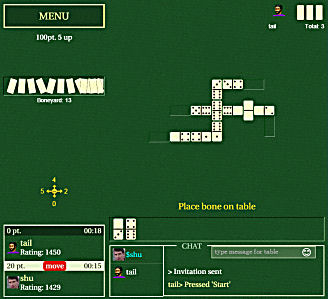 Let us introduce the new Dominoes interface HTML5 client to play the same dominoes game online on our servers. Now you can play a browser game on any computer platform, including Windows desktops, Apple devices, such as Apple computers or iPhone and iPad, Android phones and tablets and also Windows mobile devices. You can play dominoes even on your TV if it is connected to Internet. The same login used for all the games - Five-Up Dominoes, Block and Draw Dominoes games.

You play dominoes inside your browser without any additional installations. Only internet connection is required. We plan to add more games on the same HTML5 technology very soon. Try it now and enjoy the game. To move dominoes on phones and tablets just drag the required bone over the screen by your finger, on desktops - double click or drag a card by a mouse.