click here to play tri-peaks solitaire online from your browser

Tri-Peaks (or Tree Pyramids, Three Peaks) Solitaire is a Solitaire or Patience card game for one player, a combination of Golf and Pyramid solitaire games. Like Golf it is a fast paced solitaire game and like Pyramid, it has an elaborate scoring system that rewards early progress and long series. The game is played with a deck (or more than one deck) of 52 playing cards and one wild card (Joker). 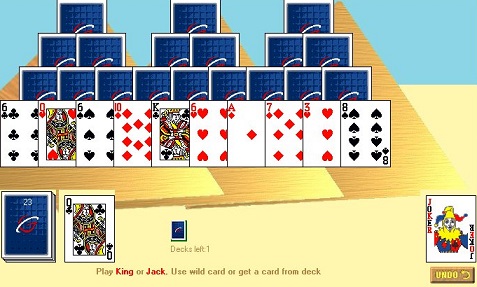 The initial layout, as shown on the picture, starts with eighteen cards dealt face-down and ten open cards on the tableau to form three overlapping pyramids. The remaining cards make up the stock. The first card from the stock is put in the discard pile. There is also one extra wild card - Joker - open aside.

Object of the Game

Clear the three pyramids by clicking on cards that are 1 point higher or 1 point lower than the top open card in discard pile. For example, if there is a King atop the discard pile, you could discard a Queen or an Ace.
The usual Rubl.com Tri-Peaks Solitaire game consists of two deals, each time you match the topmost card on the Pyramid you get a part of the hidden picture, after building the whole picture your mission is completed.

Cards values are as commonly used from Ace as 1, then 2,3, and so on, 10, Jack, Queen, King and circularly to Ace again.
Available cards from layout can be moved to the discard pile, by clicking them without regard to suit if they are 1 point lower or higher than the top card in discard pile. After moving from layout a card becomes the top card of discard pile. On the above picture you can click first on King, then on Queen. Or you can click first on King, then on Ace (King-Ace scored as adjacent cards).
In case the sequence is stopped so no card from the layout can be put over the top card of the discard pile (as is on our picture after the second move), a card from the closed stock is placed on the discard pile to start a new sequence with the cards from layout. If there is no possible move, again draw the next card from the stock.
While playing, if previously closed cards of the layout become uncovered from the bottom, they are automatically opened and can be immediately used for the playing sequence. A wild card - Joker - matches any other card in layout, it can be placed any time to the top of the discard pile to start the new sequence.
The game ends when the time runs out or if there are no more draw piles or if there are no more moves.